Marielle Franco was a councillor of the city of Rio de Janeiro, member of PSOL ((Partido Socialismo y Libertad), elected by more than 45 000 votes. She was extremely engaged with the needs and demands of the people living in the favelas, with black women and reproductive rights and LGBT.

Hers was a voice of protests against the tragic effect of the war against drugs in Rio de Janeiro and against state agents’ violence. She was a member of the Tripartite commission that surveys  military intervention in the state public security system that started in February 2018, in the Rio de Janeiro state. On March 10 she denounced  publicly the incursions of  the 41 unit of the military police in the Acari community that was responsible for the death of two young men. The political assassination of Marielle is a message to all the persons and organisations engaged in the defense of Human Rights, in particular to black women activists.The message is also a warning against the already fragile democratic institutions in Brazil. This crime should not be left without punishment, many international organisations have already showed their indignation. If you want to show your indignation and solidarity try to press the Brazilian government to carry out an affective and quick investigation of this crime. See below the addresses: 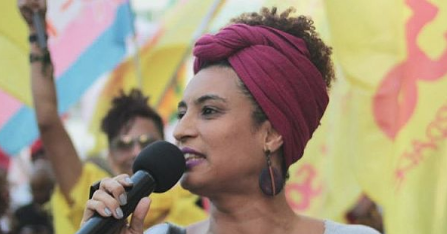